Nick: A story of hope 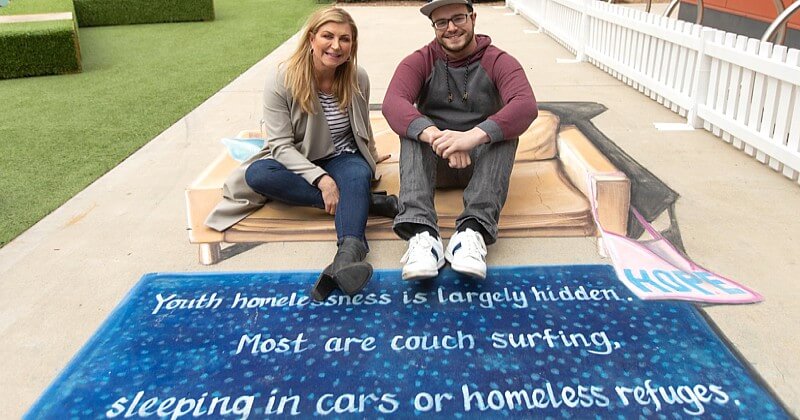 Jennifer Hansen, smoothfm 91.5 radio announcer and acclaimed journalist and newsreader, is an Ambassador for Hope Street. She recently spoke with Nick, a previous Hope Street client, to hear about his experiences with homelessness, the role Hope Street played in his life, and the ways he's now paying it forward. In Jennifer's own words…

It's hard not to describe 23-year-old Nick as the 'poster boy' for Hope Street because he's such a great example of how this wonderful organisation makes such a real and positive change in young people's lives.

And while I'd prefer not to use clichés here because it diminishes just how unique each story is behind the lives of every one of the young people at Hope Street… Nick truly is an inspiration to the others who come to the service for specialist assistance.

I first met Nick at a Hope Street awareness-raising event at Woodgrove Shopping Centre in Melton. I was struck by his ability to articulate with such maturity, all that he has been through to get to this point in his life – where he can now look at creating a bright future with hope and enthusiasm.

Right now, he's about to turn 24 and is working in construction and he also has entrepreneurial aspirations. But more on that later.

The future didn't always look so exciting when Nick was 16 and living at home. Here's part of our conversation so you can hear in his own words how tough the rollercoaster ride has been that's brought him to the place he's at now:

Jen: What happened in your younger years that led to you reaching out to Hope Street?

Nick: I left home at 16. The abuse I was getting at home was too much to handle. I was trying to stand up for my other family members who were affected. We all copped the abuse and it was a complicated situation because it came from a position of love, but there was a dark side to it.

Jen: Was it a difficult decision – to pack up and leave?

Nick: It was all the more heart-wrenching because there was the back and forth between love and destruction. So, I stuck around for as long as I could but, in the end, because I was throwing myself in the frontline, I was an easier target. It eventually came to a point where the potential for self-harm, the likelihood of taking my own life, was getting scary. I started to realise if I was going to help my family, it wouldn't be of any help to take my own life, so I realised I had to put myself first for the first time. Running away was the scariest thing I've ever had to do. It was tough because I knew I was leaving my family members to cop the abuse. And that I was going into a world I didn't know. All I knew is that I had to get out and save myself.

Jen: So where did you go?

Nick: I thought I'd try and find my old primary school friend's house. But it was probably a good twenty-minute drive away and I had no idea about how to get there. I went to the train station and started asking for help. I didn't even know how to buy a train ticket. I had to ask directions and thank God there were nice people who were all very helpful. It took ages to get there, but in the end, I did, and they let me stay the night but said I couldn't stay long term. So, then I stayed with another friend for two weeks and then I started couch-surfing around. 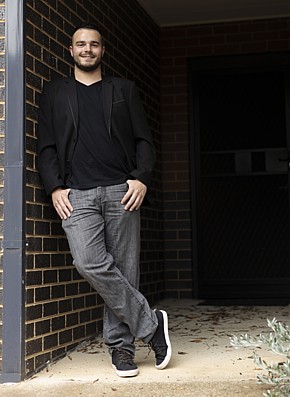 From there Nick began living life more independently until he hit a rough patch in 2016, aged 19, with a challenging experience after working in the construction industry. Nick suffered a back injury which meant not only was he unable to work, but he needed to spend excessive amounts of money on medical treatments.

He then became unemployed and tried to live with a relative while he saved money for accommodation. That didn't work out and Nick was also unable to find any friends who could help put a roof over his head. It was at this point that Nick again became homeless and began sleeping in the back of his car.

He had reached a point of despair when someone he knew suggested he turn to Hope Street for help.

Jen: What was your reaction when your sister suggested going to Hope Street?

Nick: I was very hesitant. I didn't trust anyone. But the person who called me ended up becoming my case manager. The way she was so persistent and genuinely caring, she re-inspired my faith in humanity. The following day I accepted their help and they got me straight into their youth refuge where I stayed for a few weeks until I could get into one of Hope Street's supported transitional housing units where I stayed for one year.

Jen: How was that initially?

Nick: At first, I was scared and it all felt very strange but once I was there, the premises themselves are very beautiful and well looked after. The on-site workers welcomed me in with a very positive attitude. It was beautiful really. I thought it would be run down and raggedy and crime-filled and it was the complete opposite. There's a lot of engagement with the workers and it was very well structured. You also spend a lot of time socialising and also learning life skills like cooking and cleaning.

Jen: What did you do about getting a job?

Nick: I started working as a bartender locally which was also thanks to Hope Street and the partnerships and connections with the community. That was the only job I could do because of the back injury. While bartending I was also studying. Then by early 2017 I went back to the construction industry but in a different field.

Jen: How did you come to the point where, these days, you have such a positive outlook on life?

Nick: When I ran away from home, I didn't have much hope and was even thinking about taking my own life. I don't think people can really appreciate how much it means to have a roof over your head until you don't have a home. To have a bed, a pillow or any of those things. But once I was at Hope Street, I was on the path to progress and healing. I started to feel that the world was my oyster and that anything I worked hard at, I could achieve. I didn't want to waste a single moment and had a new appreciation of life.

Jen: How much was Hope Street responsible for this shift in your outlook?

Nick: I'd give Hope Street a lot of credit for this turnaround. It's hard to put your hand out for help but it's amazing when you find there really are people there who WANT to help.

Jen: And now YOU are helping spread the word about the work that Hope Street does?

Nick: Yes. Now I'm on the Millennial Advisory Group. So as part of my involvement with Hope Street I'm trying to help get the word out about how people can help. I want Hope Street to be more of a household name. For it to be anywhere and everywhere. So, it can be really accessible to the young people who need it.

Jen: As well, you're working on setting up your own online business?

Nick: Yes, I'm working on a podcast series which I hope will be an inspiration to others. It's a project that draws on my own character and strengths. It's more about self-help and mindset. It's about paying it forward.

Jen: How difficult is it to maintain a positive outlook?

Nick: From my own experience and from reading people's biographies, I realise that people can't be positive all the time. There are times when I have down spots, but the biggest key lessons I've learnt going through my personal experience, is that it's not how many times you fall down, it's how many times you get up.

Most importantly, Nick says he knows now those 'down patches' are temporary and will pass. And he's using his story to give others hope.

The future does indeed look bright.1