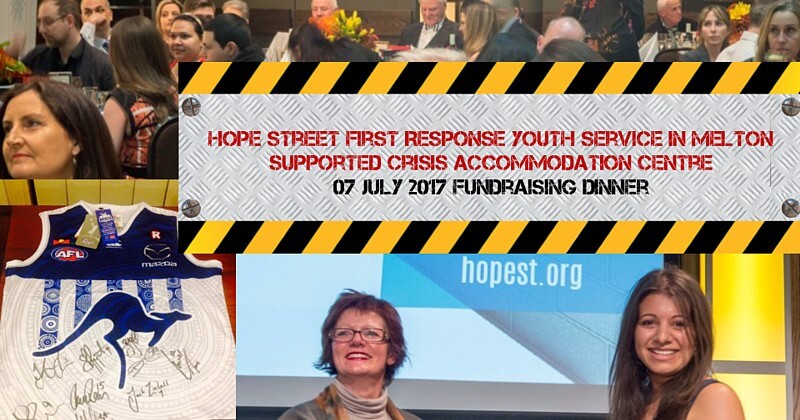 On 07 July 2017, a special dinner was held to raise funds towards the building and construction of the Hope Street First Response Youth Service in Melton.

Thank you to all our event attendees who enjoyed a fun, construction-themed night with delicious food and great entertainment at the Sofitel Melbourne On Collins.  We also acknowledge the event sponsors who provided the many great prizes won at our auction, raffle and silent auction, and our official event photographer, Zheljana Peric, who took the fantastic photos that can be seen in our photo album. 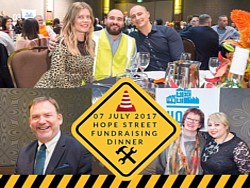 The Guernsey was launched on 23 May 2017 at the Cromwell Gallery in Collingwood and reflects North Melbourne’s rich history and deep ties to Indigenous cultures. It had been signed by current North Melbourne players including Jack Ziebell (7); Robbie Tarrant (25); Andrew Swallow (9); Shaun Higgins (4); Jamie Macmillan (34); Lindsay Thomas (12); Jed Anderson (3); Paul Ahern (15); and North Melbourne Senior Coach, Brad Scott.  Megan, who joined the football club in 2017 to support them with their Reconciliation Action Plan, personally sourced all the signatures on the Guernsey.

As a result of the fundraiser and contribution of our supporters and partners, Hope Street raised $18,431.30 towards the furbishment (eg study benches, computers, bean bags and shelving) of the shared study space which was highlighted by young people when consulted about the design of the new youth refuge.

How you can help

Help us create a place of real hope and action that will meet the needs of Melton's young people and young families in crisis by donating to our Melton First Response campaign today.

Growth with Hope Street
A priority at Hope Street Youth and Family Service...

New project to turn homeless youth to homemakers
Hope Street have designed an innovative support re...