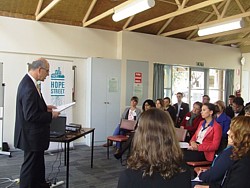 The Hope Street BOOST Program is funded as the second stage of the Enhanced Youth Refuge Response initiative of the Victorian Government in responding to youth homelessness.  It is a part of the joint Commonwealth and State Governments National Partnership Agreement for Homelessness.

The NPAH Victorian Implementation Plan committed additional resources over four years to improve and expand on services targeted at young people including $13.75m over four years to strengthen youth crisis responses by giving youth refuges a new and enhanced role in improving outcomes for young people.  It enhances the youth refuge system response by diverting young people from the homelessness service system where appropriate, providing early intervention responses and responding effectively to young people in crisis.  The Hope Street BOOST Program one of the Victorian Youth Specific NPAH Initiatives.

Hope Street developed a service model to achieve the intent of the Commonwealth Government White Paper The Road Home: A National Approach to Reducing Homelessness, (released in 2008) to provide new service approaches, aligned with the White Paper goals and directions to reduce homelessness across Australia by 2020.  The Hope Street service model also captured the key focus areas of the Victorian Government as specified in the NPAH Victorian Implementation Plan.

In August 2012 Hope Street was successful in attaining funding to deliver the Enhanced Youth Refuge Response initiative in the North Division.  The initiative was funded for twelve months.   The Hope Street BOOST Program went live in September 2012 with the first client to receive services was in early October.   The program has gone from strength to strength since this time.

To capture and evidence the impressive achievements of the BOOST Program, Hope Street engaged the Australian Housing and Urban Research Institute (AHURI) Research Synthesis Service to conduct an evaluation of the program.  The AHURI Research Synthesis Service, a national, not for profit organisation, is well placed to deliver a rigorous and independent evaluation of BOOST program. As an organisation AHURI funds, conducts and disseminates research on housing, homelessness and cities.  AHURI has demonstrable knowledge and experience of the housing and homelessness sectors. The Research Synthesis Service team has specific expertise in the design of evaluations and carrying out ethical, transparent and accountable research with a range of key stakeholders, from government officials and policy makers to community groups and residents.

The program has been funded for an additional twelve months to June 30th 2014 as a part of the transitional agreement between the State and Commonwealth Governments of the NPAH.